Since the spread of the coronavirus, researchers have focused their efforts on the development of a vaccine to protect people from contracting the virus. But scientists estimate that an effective and publicly available vaccine could take up to 18 months to create.

In the meantime, scientists are looking for ways to reduce the rate of infection to keep from overwhelming hospitals worldwide.

According to a team of researchers at the Cardiff University School of Medicine, readily available dental mouthwashes can eliminate coronaviruses' lipid envelope by tackling virus replication in the mouth.

But can gargling mouthwash really help fight the spread of this virus?

Let’s take a closer look at this new research.

Research on Mouthwash and Coronavirus

Published in the journal Function, a team of international researchers implemented a scientific review of over 100 articles to learn whether mouthwash can reduce transmission of this coronavirus in the early stages of infection.

SARS-CoV-2, the strain that causes COVID-19, is a virus with a fatty (lipid) membrane. The team states that previous studies prove that ingredients often found in mouthwashes can disturb the infection's lipid membrane. This then reduces its spread.

The researchers also evaluated existing formulations of mouthwash on their potential to disturb the SARS-CoV-2 lipid envelope based on the concentration of the potent ingredients used. It was concluded that several of them warrant clinical assessment.

It was noted that the lipid envelope doesn’t vary when viruses mutate; if the method is effective, then it should still work against any new coronavirus strains that develop.

Gargling mouthwash containing the above ingredients may inactivate the virus in the throat, which in turn could help prevent coughing and sneezing, according to the study, although we still lack concrete evidence of this effect.

Scientists are calling for more research on whether mouthwashes could protect people against the spread of coronavirus. The quicker such evidence is evaluated and published, the faster the public can help protect themselves from coronavirus using new methods.

In test-tube experiments and various clinical studies, some mouthwash formulas contain enough known virucidal ingredients to combat lipids in similar enveloped viruses. However, gargling mouthwash hasn’t yet been recommended by major public health bodies as a way to prevent coronavirus.

In the study, the team concluded there was an urgent need to test the success of ingredients found in mouthwashes in clinical trials. It isn’t clear whether oral rinses could have any effect in battling coronavirus, as safety and exposure are also things that must be considered.

The scientists noted that the pathogen is, “highly sensitive to agents that disrupt lipid bio-membranes.” If successful, this could prove that the agents found in distributed mouthwashes could be used for other strains of coronaviruses. These are strains that could lead to any illness from the common cold to SARS.

Mouthwash brands such as Listerine have been advising consumers not to use mouthwash as a method of fighting COVID-19.

“LISTERINE® mouthwash has not been tested against the coronavirus and is not intended to prevent or treat COVID-19. Consumers should follow the preventive measures issued by the World Health Organization, including washing hands frequently, maintaining social distance and avoid touching your eyes, nose and mouth,” the website notes.

Protecting Yourself From COVID-19

The researchers behind the study make it clear that their work is speculative. More studies must be conducted to learn whether mouthwashes are appropriate for defence mechanisms against the spread of coronavirus.

Nevertheless, the work demonstrates that this is an important area to study. This research is urgent by the current global public health crisis, and learning new ways to protect against strains of coronavirus is critical.

As we wait for potential new studies, it’s crucial to continue to follow mandated protective methods to protect yourself and others from contracting coronavirus.

Consumers should follow the preventative methods of safety, as announced by the World Health Organization. These methods include washing hands often, maintaining social distance from others, and avoiding touching your eyes, nose, and mouth. 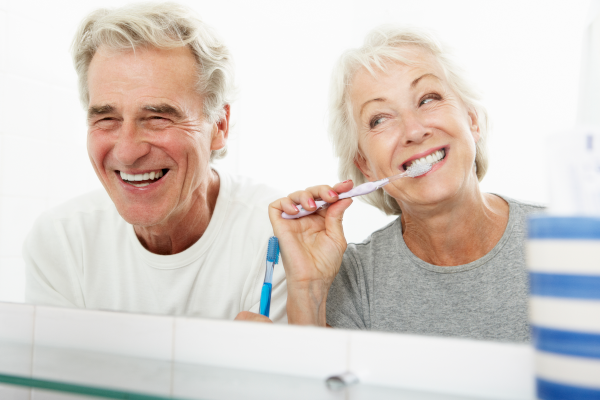 There's no denying the array of adverse health consequences associated with failing to brush one's teeth - yet many of your patients probably still struggle with maintaining regular and thorough brushing.

Of course, we must continue to press forward and encourage patients to brush!

At the centre of your potential for successful patient outcomes is giving clear, understandable proof of the associated health benefits of consistent teeth-brushing. For instance, there is growing evidence that consistently brushing our teeth is conducive to preventing heart failure.

The Health Benefits of Brushing Your Teeth

As you know, daily brushing prevents harmful bacteria from causing oral infections (e.g., tooth decay and gum disease). However, as we develop a deeper understanding of the oral-systemic link, it is clear that oral health has a strong connection to a wide variety of conditions beyond the oral cavity.

For example, there's reason to believe that keeping up with oral hygiene can protect from severe respiratory infections; a study from 2011 has linked gum disease to poor lung health.

Brushing regularly also fends off bacteria called fusobacterium nucleatum. High levels of this bacterium have been found in patients with colorectal cancer.

The Science Behind Oral Health's Impact on Heart Health

When your patients brush their teeth twice a day – for at least two minutes – the risk for cardiovascular disease is lessened. Various studies have been performed on this subject, looking at it from different angles.

In the next section, we'll look at several studies that highlight how vital brushing teeth is to your patients' heart health.

One study assessed how lacking in oral hygiene causes bacteria to emanate in the blood. This leads to body inflammation, which is conducive to an irregular heartbeat and heart failure.

The researchers examined the results provided by 161,286, aged 40 to 79, who had no history of the conditions mentioned above. After routine medical examinations, information was collected about various health factors, including oral health and oral hygiene behaviours.

There was a follow-up after 10.5 years that showed 3% of participants with an irregular heartbeat and 4.9% with heart failure.

The findings revealed that those brushing their teeth 3-plus times per day had a 10% lower risk of experiencing an irregular heartbeat. It was also decided that adhering to those best-practice oral hygiene standards generated a 12% lower risk of heart failure after the 10.5-year follow-up.

Another study that was presented to the American Heart Association took an in-depth look at heart health.

More specifically, those involved in the research examined whether a person's teeth-brushing habits impacted their risk of experiencing a heart attack, heart failure or stroke.

682 people were queried about their oral hygiene habits. It was found through various mechanisms that those brushing less than twice per day for less than two minutes were at an increased risk of those negative heart-centric consequences.

Compared to those brushing at least twice a day for at least two minutes, less frequent brushers presented a three-fold higher possibility of experiencing those heart-related ailments.

The Facts Speak for Themselves: Oral Health is Simply “Health”

Some patients might brush aside (pardon the pun) the importance of brushing their teeth. They might mistakenly believe that keeping their mouths clean and fresh is mostly aesthetic in its function.

However, with the above information, you can show to your patients how vital brushing their teeth can be to their overall health.

Dental patients must have a full understanding that oral health isn't its own category. Instead, what happens in our mouths plays a role in the rest of our bodies. Such a notion should be a primary focus in how we all care for ourselves.